I was asked to troubleshoot a VM. SCOM was reporting the following message: "Logical disk transfer (reads and writes) latency is too high - The threshold for the Logical Disk\Avg.". Also, jobs (this is a SQL server) took longer to run (almost twice a long). Now, this seems like an issue with disk I/O: the path to storage endpoint (SAN), incorrect HBA configuration or perhaps congestion on the storage array - none of them are true. Actually, it doesn't have anything to do with disk latency!

So I opened up VROPS. Looked at the CPU | Contention. These are high numbers. The contention would suggest this VM is fighting for resources, cannot get it, and would be able to perform better. So I checked the host and the configuration. It's a large VM, with 14 vCPU's, on a 16 core host (32 logical CPU's, hyperthreading is enabled). BUT IT'S THE ONLY VM ON THIS HOST!!!

Next, I took a look at the CPU | Demand. Demand was high, but while demand was high, the contention was low! So this confirmed the conflict with other VMs issue - there is none. Something else is going on here! I remembered an issue with C-State throttling on Intel CPUs. If a VM is low on CPU Demand, the physical CPU doesn't require to run to full clock speeds. However, once a VM demands more CPU resources, the CPU needs to switch to a higher rate, and the duration to switch to that faster state introduces latency. It's called %C_Lat and can be viewed in . %C_Lat is also taken into account when calculating CPU|Contention (%), so we need to check the performance setting in the BIOS on the host.

​So I opened up OneView, checked the profile and by default it's configured to 'Balanced Power and Performance'. I've switched it to 'Maximum Performance'. Have a look at the screenshot below, and see what changes: 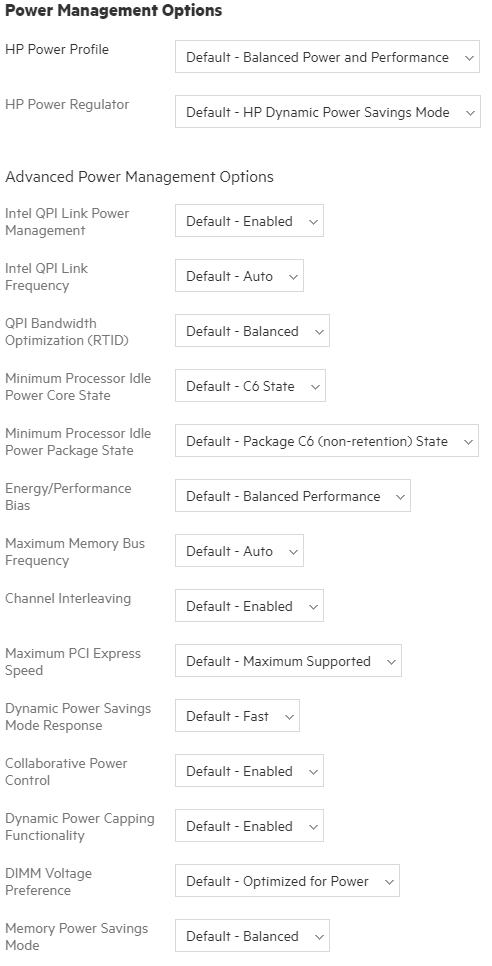 Here the profile is set to 'Balanced Power and Performance'. C6 State is enabled and also Package C6 is enabled.

Here the profile is set to 'Maximum Performance'. There are 'No C-States' and also 'No P-States'. Also DIMM Voltage Preference changes to 'Optimed for Performance'.

Great. I applied the profile and waited until the host was started again. Note the difference how ESXi is displaying the power profile. Both display 'High Performance' but 'Technology' is ACPI C-states.

This is the Powersetting when 'Balanced' is selected in BIOS

This is the Powersetting when 'High Performance' is selected.

Awesome... I've moved the VM back to it's original server. And we should see improvements...

But that is for tomorrow, I'll collect a full day of statistics and present them tomorrow with my conclusion, but also show the impact!!! Stay tuned...

UPDATE
Due to the comment below, you can find the results here: https://www.jume.nl/troubleshooting-disk-latency-cont