I've been hunting down this issue for one of my clients. They have brand new Dell T440 servers (I've also seen this issue on brand new DELL T640 servers). Great gear - however, after running for a couple of weeks we got this PSOD on one of the servers. 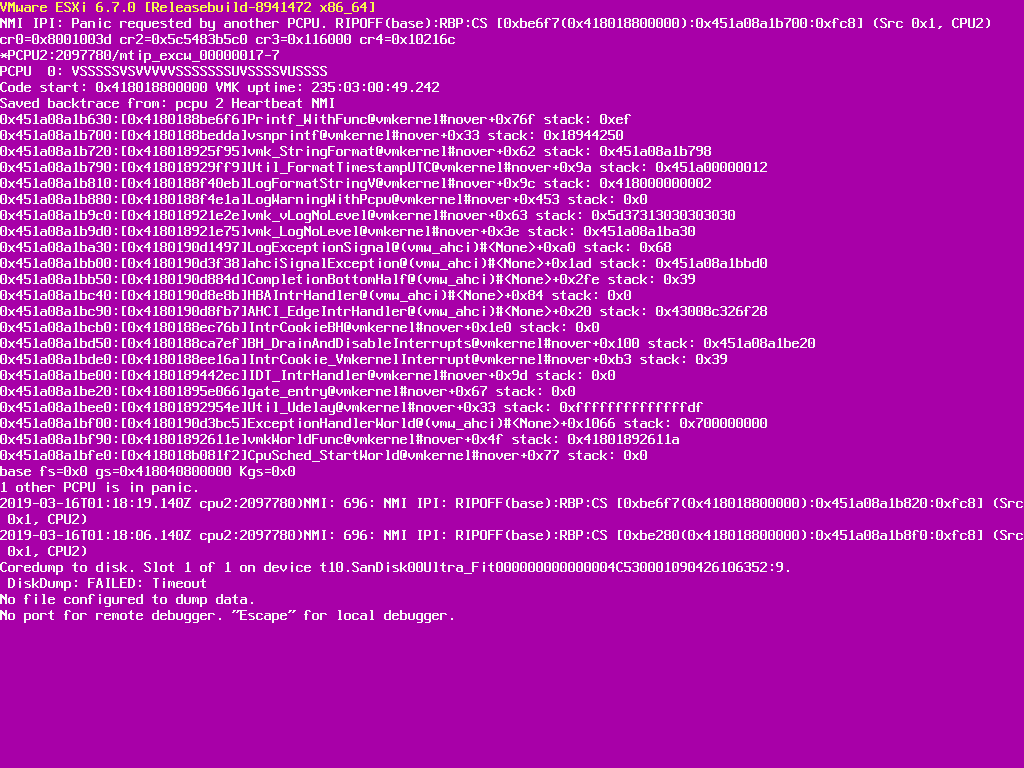 PSOD: NMI IPI: Panic requested bt another PCPU. RIPOFF(base)
This PSOD is not good (in general: PSOD's never are, haha). As this is a brand new server, I did the following:
Yes, I know, a bit lazy, I was thinking: this might be a one-time event, just reset that server... However, after a couple of weeks: BOOM. Same PSOD, this time another PCPU.

Okay, let's search for known issues: found this on the VMware forum: https://communities.vmware.com/message/2819124

No solution, let's do basic troubleshooting:

Everything looked fine. Until a couple of days later: BOOM. Same PSOD, slightly different, this time another PCPU. I was using a SanDisk Ultrafit USB3 memory key inside the server (the mainboard has a USB3 port, and is excellent for running ESXi from there. So I decided on getting another USB key:
Hoping it would finally resolve this issue. However, after a couple of weeks: BOOM. The same PSOD - DAMN YOU STUPID SERVER. Next, I did:
Guess what; it's stable. Whoohoo - uh oh - BOOM. Same PSOD... After a couple of weeks again.

I was planning to sort this out by the end of the week, so I reset the server. Now the PSOD was after a few days, reset, now after a day, reset, now twice a day, reset, now one hour... Not good! Also, the other server was displaying the same behavior.
TLDR; the PSOD is on any media, any ESXi build, any firmware. The time is random. However, it's occurrence over time is getting higher and higher.

Cause of this issue

use 'ls -e' to display the datetime stamp in seconds

I check the logging. One thing that was strange is the logs (timestamp is within seconds), this tells me a lot of logging was done in a very short time. Also the logs are small (I know: compressed, but even then: they are small even for compressed files). 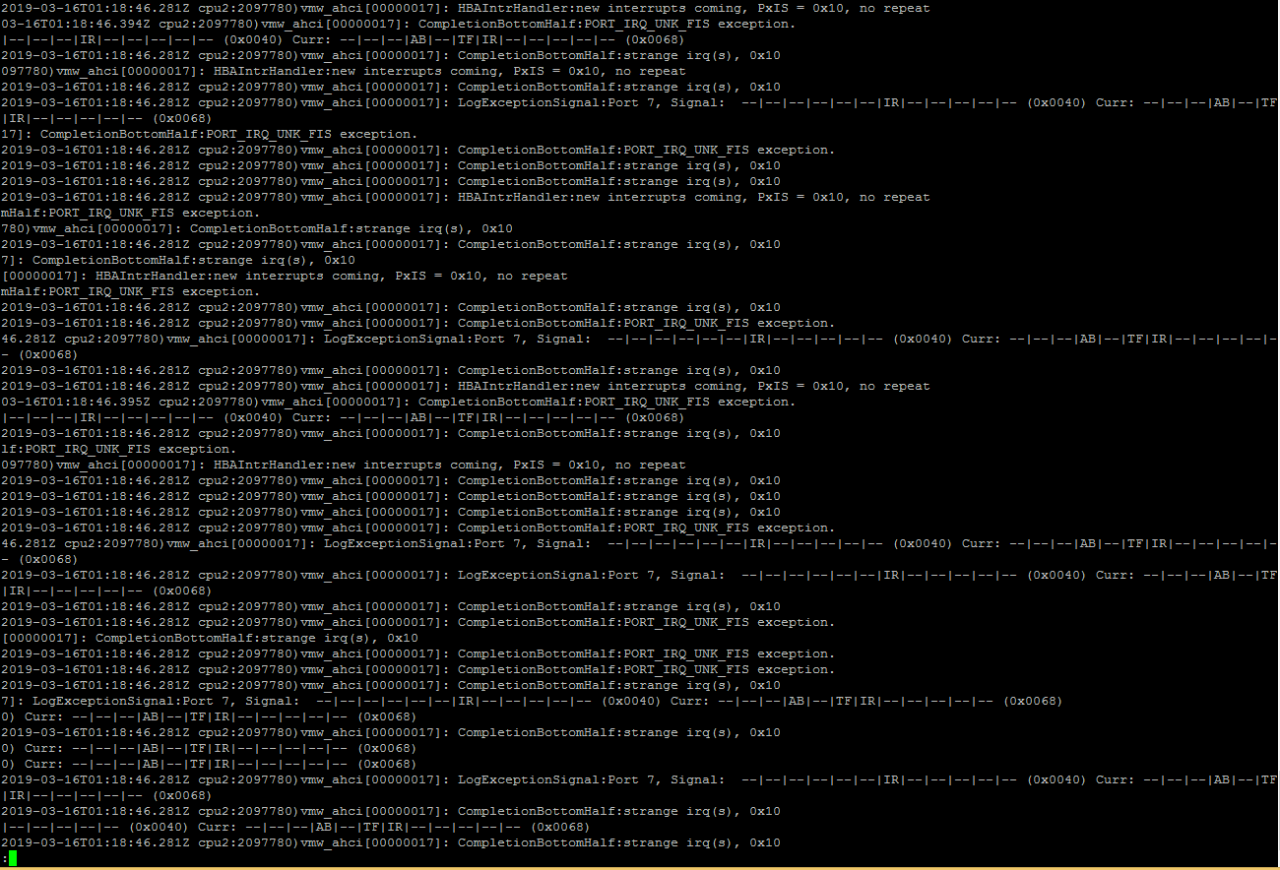 lot's of the same message from the ahci driver

Inside the there a lot of message like this. Check the driver causing these issues: !!! I'm not using AHCI (which is a controller: the 'new' IDE), not for my SSDs nor the HDDs (they are on the PERC raid controller). There is a DVD-ROM player though. I decided to disable the since I'm not using it anyway.

My best guess is that the driver / AHCI controller / DVD-ROM player has an issue, causing massive amounts of errors to be written. The PCPU isn't capable of writing the errors to disk, panics, get's caught by another PCPU and triggers a PSOD.

Disabling the driver can be done on the command line. You can find the instructions here in this knowledge base article: https://kb.vmware.com/s/article/2147565

First check which driver is loaded:

I have 'vmw_ahci'. But from my experience, if vmw_ahci isn't loaded, it still detects an ahci controller and loads 'ahci'. I havn't tested this driver, but I didn't want to take any chance the server would crash again. So I decided to disable both: 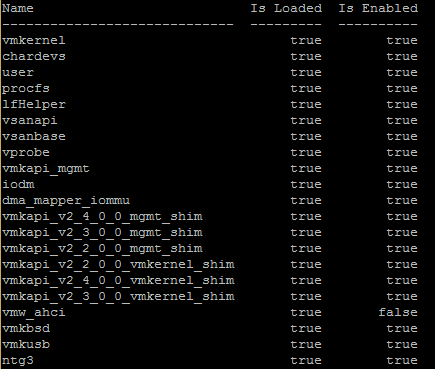 ​When running 'esxcli system module list | grep ahci' again I see the driver 'Is Enabled' set to false, but 'Is Loaded' is true. So rebooting the server helps.

vmw_ahci and ahci is not loaded

Now the server is displaying the correct state:

Finally: the server is stable now. I contacted Dell Support, they were very helpful in sending me a new DVD-ROM unit. However, I didn't bother to install it. I couldn't risk more random downtimes. I'm not using the DVD-ROM anyway. Hope this helps anyone!
Tweet
How do you feel about this post?
Happy (3)
Love (2)
Surprised (0)
Sad (0)
Angry (0)
×
Stay Informed

Same problem here too but when you disable vmw_ahci , you kill the datastore right ?

0 Cancel Reply
Same problem here too but when you disable vmw_ahci , you kill the datastore right ?:o
Cancel Update Comment
1
Subscribe to our blog Unsubscribe from our blog