6502 computer on a breadboard

Besides 'work', I also got hobbies (some might say I've got too many). In this first post, I'll share my love for electronics. And I would like to highlight this 6502 CPU on a breadboard. For the last couple of months, I've been following Ben Eater on YouTube, watching his tutorials, decided to order the components and start building. The beauty of his approach is you learn about electronics, basic logic, starting from a diode to a transistor: the fundamentals of a CPU. And from a CPU to the interaction between other components like a clock, EEPROM, memory, IO chips, and (VGA) display. 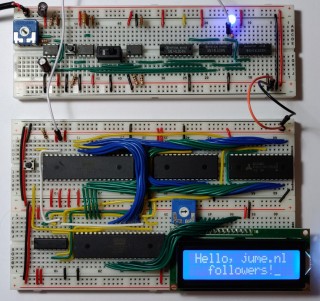 My current build so far. The top module is the clock generator, based on a couple of 555 timer chips and some logic. The bottom two breadboards holds the reset button, 65C02 CPU, EEPROM, 32k memory and then some logic NAND gates, IO module (65C22) and a display.

The MOS 6502 CPU, developed in 1975, was much cheaper and faster and very popular in the '80s and '90s. It was used in computers like the Commodore 64, 128, Atari 2600, NES, and Apple II. And since I've owned all of them once in my life - this project adds an extra layer of nostalgia. The 6502 can still be bought on eBay or AliExpress (I got mine from there), but these days there is an alternative: Western Design Center 65C02. A chip still sold today, with some excellent new features and bug fixes (yes, a chip can have bugs).

You also learn about Assembly Language. I remember when I was about 16 years old, I went to the library in Rotterdam to get one of the few copies available about assembly language. Back then had some Basic knowledge, but still, the assembly language was a bit 'conceptional,' and I didn't fully understand what was going on. Now, 25 years later, I know better - I whished we had YouTube back then! But it is never too late to learn, looking into how the basics of a computer works, makes you understand how sophisticated a computer is - it's almost a miracle. Almost; because after learning more and more, it all makes perfect sense.

​I've done things a little bit different though. In another post, I've already highlighted Visual Studio Code. So I really wanted to have an extension that allowed me to write assembly for the 6502 CPU and compile it. There are a couple of extensions on the Marketplace and I picked Retroassembler which works pretty good so far. I also installed Hexdump in VSCode to dump the compiled bin file in hex. 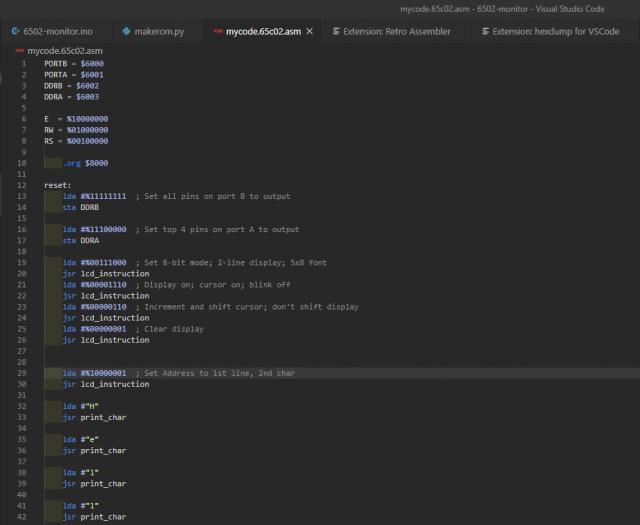 ​My next project is going to be the CPU on a breadboard build. I've ordered most parts already. When I've got some spare time, I'll share my experiences. Meanwhile, if you are also interested, check out Ben's work on his site and YouTube. Since I've found his content is of such high quality, I decided to support him through Patreon.

No comments made yet. Be the first to submit a comment
Subscribe to our blog Unsubscribe from our blog